The second company I started was Net Enforcers, Inc (NEI). The idea originally started out as an eBay monitoring service for grey market sales in the consumer electronics industry (an early version of our website can be found here) but soon grew into a wide range of technology and services, solving a very big problem. Although we began the company as a service provider, NEI quickly pivoted to develop its own unique technology platform around grey/black market e-commerce detection and enforcement. We had no idea that over time, NEI would slowly transform itself into a leader in the world of cybercrime and online fraud detection. Creating successful platforms in markets that have yet to exist has become a hallmark of my professional career!

The idea for NEI originated during my time as an electrical engineer for an electronics company that had been plagued by grey market distribution. Grey market distribution is when an unauthorized person or entity sells your products online in a low-cost, unauthorized manner. NEI developed its business and reputation by working closely with several government agencies to stop illegal online activity. We detected this activity through a spider/crawler technology we developed, and the results were rendered on our browser-based platform, called HAL. Our technology was so effective that we eventually gained the support and cooperation of the FBI, DEA and ICE, as we were able to detect crime faster than anyone else. NEI eventually gained world-renowned brands like Apple, LG, Samsung, Sharp, Novartis, Eli Lilly, Sony and others as long-term clients. One of our 2006 presentations on the HAL Platform can be found here. Through our success, NEI also became a registered Private Investigative Agency conducting undercover operations, investigations, and take-downs. By 2007, we had built a market-leading company serving a critical need in the world of online crime – and the business showed no signs of slowing down.

Profitable and rapidly-growing, a trusted friend recommended that we try to raise outside money to help scale from our 60-person operation into a full enterprise. Our technology portal was sophisticated and innovative and our clients were in love with our innovation plan. 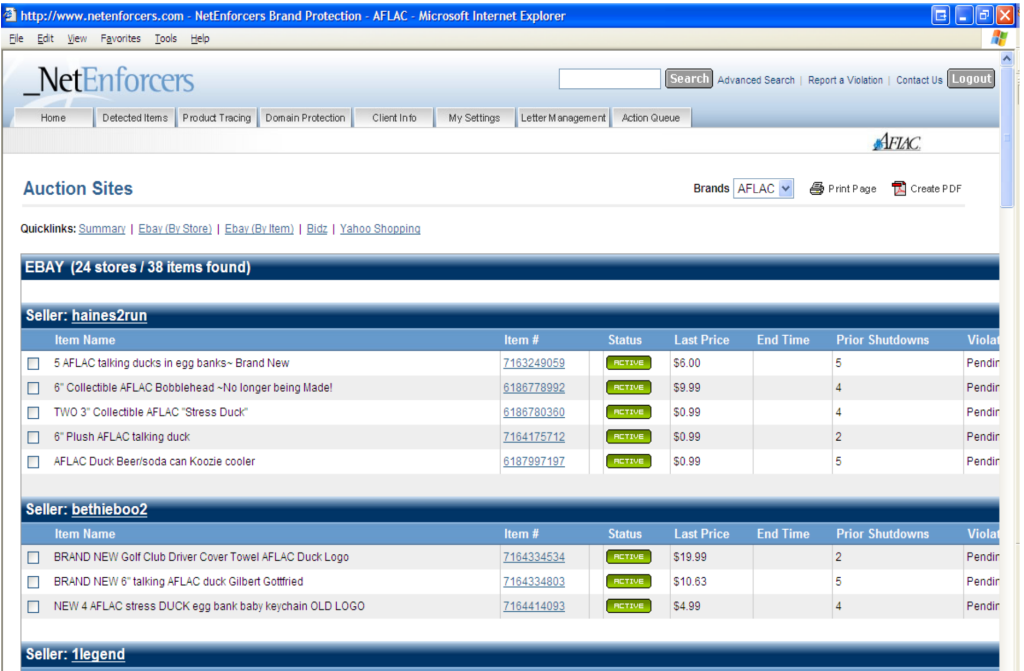 Instead of finding money, we were welcomed in the market with a few acquisition offers – quite a surprise to say the least. While it was never my intention to sell the company, it was a very difficult decision to make. When you’re earning more than $1 million a year profit, it’s hard to just say, “Let’s sell!” and it took me a few months to figure this all out. The last known version of our corporate website before we sold NEI can be found here.

After courting multiple acquisition offers (including one from Kleiner Perkins, the top-shelf venture capital firm), I decided to sell Net Enforcers to a technology company called Intersections, Inc. I decided to sell NEI to Intersections because I respected its CEO, and I looked up to him as a mentor. I also liked his idea of growing a combined billion-dollar enterprise together. I signed the Letter of Intent in March of 2007 and spent more than eight months in due diligence – Intersections spent more than a million dollars in legal fees during the course of the acquisition of Net Enforcers. The deal closed in November of that year. An article on the acquisition can be found here.

While the story of NEI ended with what I thought was a really awesome personal exit, it also came with some very important, expensive and painful lessons about deal mechanics, timing, who you sell your company to, and the responsibility of managing your new wealth. Although the sale occurred at the peak of the 2007 market, less than  10 months later, the market tumbled to depths not seen since the Great Depression (referred to by many as “The Great Recession”). This crash started a chain of events leading up to Intersections’ decision to try to reverse the NEI acquisition altogether in order to save the parent company. Keep in mind, no one knew if any of the banks would survive and the accompanying widespread panic among the public markets, including Intersections’ stock price.

Unlike the dot-com bust in 2001, the Great Recession had a much larger and widespread impact to the economy and unfortunately, it caused me great personal pain as well. 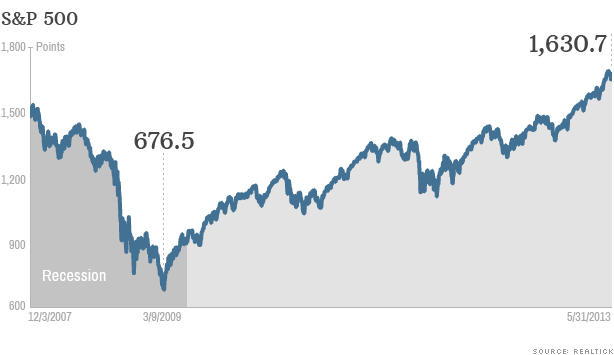 In 2008, massive banks were going insolvent, enterprise corporations were losing billions in value, the housing market crashed and no one knew if the end was near. Due to the insolvency of many of their banking customers, Intersections was impacted by a major reduction in revenue and ultimately had to abandon its growth-by-acquisition strategy altogether. This reduction caused a big strain between Intersections and I, as I came to the realization that I would never make my earn-out with these financial cutbacks and layoffs.

After multiple failed attempts to find a resolution related to my earn-out and the future of Net Enforcers, Intersections terminated my position as part of their cost savings strategy. It was something I never saw coming, and I felt humiliated, embarrassed, angry, betrayed, and confused.

Faced with what to do next, I had a hard time deciding on whether to walk away from a more than $6 million earn-out or find some other form of resolution. While I personally and professionally responded to the allegations within my termination letter with factual evidence, emails, documents, and materials, Intersections chose to not respond to my personal request for a sit-down meeting. Unfortunately, the situation felt disingenuous and I did not think I should have to walk away from my earn-out especially knowing I hadn’t done anything wrong. Due to the lack of response from Intersections, I chose to hire a law firm to find out why Intersections terminated and refused to meet and discuss an amicable resolution with me.

After sending an initial demand letter, Intersections agreed to a meeting. Unfortunately, Intersections was not interested in settling with me and remained aggressive and unreasonable. Although at the conclusion of the meeting, both parties agreed to not file suit against one another, within an hour of its conclusion, Intersections filed their “kitchen sink” lawsuit anyway – we got played and were forced to countersue. Only then did I discover that Intersections had been known to be an aggressive and litigious corporation, having filed multiple suits in the past, and their method of pressuring a favorable resolution with the courts.

So what’s a kitchen sink lawsuit? It’s when the one side makes up claims regardless of basis and veracity in an attempt to create pressure, influence, and financial stress for the other side. This is done in order to force a settlement and ultimately seek a dismissal of your countersuit. You can read more about this legal strategy here. This stuff really does happen.

I was advised that during commercial litigation, I had to accept the ugly reality that even a baseless lawsuit can hurt a highly credible reputation, and I needed to do everything in my power to clear my name. When I was at NEI, I had relationships with the FBI, DEA, ICE, and others, and carefully planned to have agents testify on behalf of my character. I spent months collecting all the evidence I could find to win this case as I was now fighting not just for my earn-out, but for what I valued the most: my name, personal integrity, and reputation. In those efforts, legal counsel advised that I take a polygraph, which I did and passed. That polygraph can be found here.

During the course of the litigation, my legal team discovered that following my termination, an outside financial firm was hired by Intersections to audit the acquisition of Net Enforcers and determine if NEI’s pre-acquisition financials were correctly stated. This was performed as an attempt by Intersections to find cause, in order to eliminate my employment agreement, pay my severance, and award me my stock options. Further validating my personal integrity, the auditors concluded that no wrongdoing or inaccurate statements were made by NEI and no fraud had been committed during the acquisition. A copy of that audit report can be found here.

So after months of aggressive legal action, which amounted to nothing more than tiresome and pointless fighting. Intersections and I finally agreed to find an amicable resolution. This was the same resolution I sought when all this started, but for whatever reason, it’s “sue first, ask questions later” with some people. We both agreed to attend a mediation and after eight hours of debate, found a resolution. As a result, we dismissed each other’s lawsuits and went our separate ways. That dismissal can be found here.

Today I still believe that Intersections is a good company and delivers well for its shareholders. I still have a lot of respect for their leadership team, although I cannot say I agree with their resolution strategy. Upon reflection, I think that we were all put in a difficult position with the incomprehensible instability of the market, which left us both unsure of what the other would do, and a fight ultimately broke out. I believe that the economic crash caused our insecurities to escalate, and unfortunately, lawyers got paid to perpetuate a fight, and they did it well.

I certainly learned many lessons about litigation, selling your business, defending your reputation, and firmly believe that the experience made me a better person, better executive, and a better business leader. If someone was to ask me, “If you could go back, what would you do differently?” First, I would not have hired a law firm; instead, I would have found a way to get a sit down with the Founder/CEO. I still think that if we were still working together, we would have been chasing down that billion-dollar market valuation.

Following some much-needed time off and sheer boredom, I decided to build again and put all these important lessons to work. I landed on a great idea and in 2013, started CyberSponse, Inc. As a result, starting my next venture even landed me on HBO’s John Oliver!